So my grand plan to rewrite my game for the Community Games launch didn’t quite go according to plan, so I decided to polish up the original version as a bit of practice. It has now been approved and is on Xbox Live Community Games – NXE users can download the trial and buy it now, while everyone on the old dashboard will have to wait until November 19th. The internet ranking site is up at http://www.edngames.com – by soliciting scores I should be able to get a decent idea of how many people are buying the full game which you need to do to get internet ranking passwords. 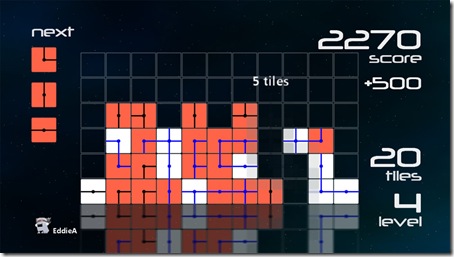 The Community Games community is just getting off the ground, and already establishing its own “ground rules” for peer review based on the very loose guidelines set forth by Microsoft (presumably so they cannot be held responsible for anything that gets passed). The most important points to watch out for, and the community WILL FAIL you for breaking are:

Lines is available for 200 Microsoft Points which is about $2.50. I get 70% of this so I could get some beer money. Fingers crossed!

One thought on “Lines now on Xbox Live”