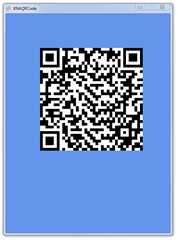 I’ve just pieced together a renderer for QR codes that outputs a texture instead of System.Drawing.Image objects (the Xbox .Net Framework version does not have access to the Drawing namespace). I’ll be using this as a way of uploading times on Avatar Kart to my server instead of copying a code which you had to do in Lines, my previous game. I will release the code once I’ve tidied it up a bit.