The first preview version of the Windows Phone 7 SDK is out and it doesn’t support Japanese (or non-Latin) text in the English ROM. This is a huge disappointment. 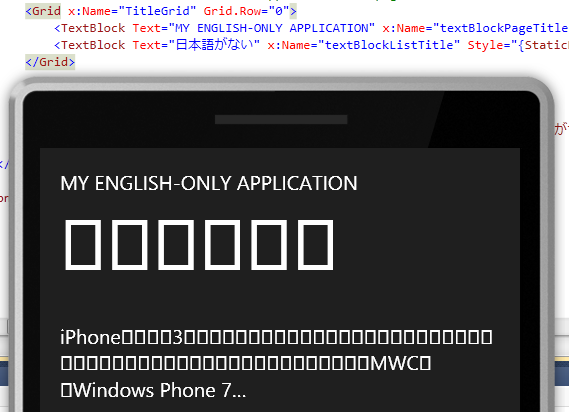 One of the major advantages the iPhone has over almost every other smartphone platform (and the major reason I bought mine in the first place – I needed Japanese language support) is the built in support for non-Latin languages and their input methods. This allows Apple to provide one single worldwide firmware edition.

Previous versions of Windows Mobile have required users to hack in Japanese fonts using the registry and rely on some awful third party hacks to get Japanese IMEs working. I seriously hope that before WP7 is finished, Microsoft just install worldwide fonts and IMEs like they started to do with Vista. There is no excuse. We are unlikely to get low-level access to the registry this time around to hack the support in ourselves to non-Japanese ROMs.

— more like it totally ignores it. I suppose screens of square boxes fits the “Authentically Digital” principle.