Update 13th June 2015: It looks like Microsoft has reversed course and reinstated the Windows 7 Backup and Restore feature in Windows 10! Success!

Update 16th Sept 2013: What follows is a rant written after upgrading to 8.1 and seeing my automated backups just stop working and the backup restoration function also removed. An afternoon was wasted faffing about with the new File History feature which still refuses to backup files not on my system drive and deliberately ignores files in the SkyDrive folder, preventing you from having a local backup. I now use CrashPlan which behaves like Windows 7 and 8.0 used to be able to back up files.

Windows 8.1 is now released to manufacturing and those with MSDN or Technet Subs can download it now.

I have the RTM version now set up on home and work machines and have been running the Preview versions on both my Surface RT and Surface Pro. Windows 8.1 has some glaring errors.

You no longer have to install the SkyDrive app separately as it is now built into the OS. Windows 8.1 makes a concerted effort to force you to use SkyDrive. 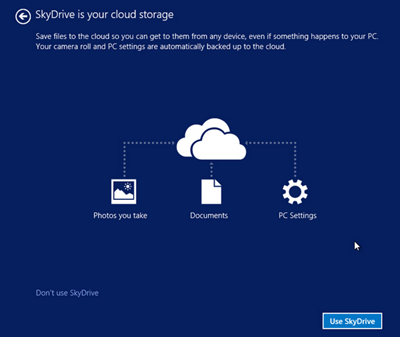 The above is a screenshot of a screen displayed during the upgrade process. Can you see the error?

“automatically backed up to the cloud”

This is nonsense – if you delete a file from your local machine, it will be deleted from the cloud. This is NOT a backup. Live mirroring is NOT a backup. If a sync goes wrong – your file disappears completely. There is no backup.

Edit: Turns out SkyDrive has a “Recycle Bin” for deleted files, but it removes files once it is full or after 30 days. So, you might randomly be able to get your file back. Version History also only works for Office documents. 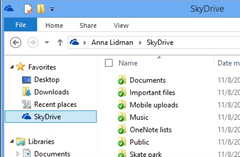 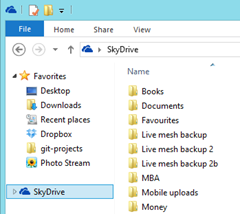 The “Windows 7 File Recovery” backup system has been removed in 8.1

Windows 8.0 actually contained two backup systems, the new “File History” and the awesome old backup system from Windows 7, threateningly renamed “Windows 7 File Recovery” as a warning that this will be removed. Lets compare the systems:

Edit: You can create a System Image in 8.1 (Click “System Image Backup” on the File History screen) but this doesn’t work on an automated schedule, so is not an automatic backup.

It gets worse. File History is even more useless in 8.1.

“File History” no longer backs up your SkyDrive folder in 8.1

Microsoft really don’t want you to have a local backup of your SkyDrive files. Take a look at this:

No problem you think? Just add your SkyDrive folder to a Library and it should back up? Nope – all the SkyDrive files are ignored completely, even if you manually add them to a Library.

The response from Microsoft on this is beyond tragic (from here): 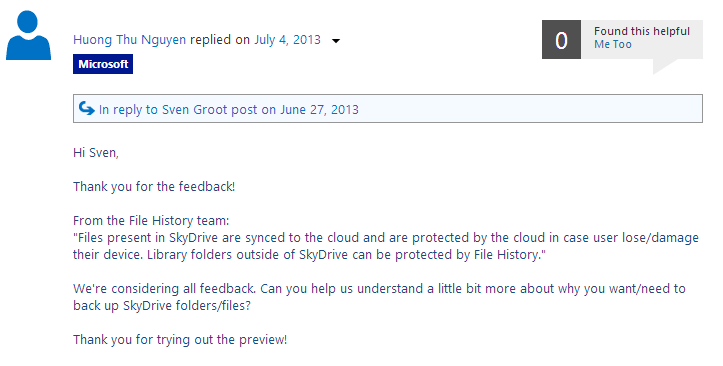 Your files “are protected by the cloud in case user lose/damage their device”. What about protection from user error or viruses or badly written programs? If your files get corrupted the corrupted files will sync to the cloud and then sync to all your other devices.

It appears that Microsoft are desperate to push SkyDrive, even at the expense of the computing safety of their customers – customers you’d hope were being educated about safe computing. Now I am on 8.1 I am personally stuck with no built-in backup system. My experience with File History has been awful – it appears to even ignore an additional Library I’ve created to include non-library files. I literally cannot get it to back up files on my computer, it is useless. I am going to have to go with a third-party backup system like CrashPlan now.

Windows 8.1 was Microsoft’s chance to undo the wrongs of Windows 8. Users are now faced with the prospect of upgrading and being faced with no backup solution, or even worse their existing backups just stopping working with no warning.

Sort it out Microsoft.

Edit: Some excellent discussion on this over at Hacker News: https://news.ycombinator.com/item?id=6388431