The only official  Windows Phone in Japan is au’s Toshiba IS12T. Not wanting to change plan, I picked up a SIM unlocked Nokia Lumia 800 and put the Softbank micro SIM card from my iPhone 4 inside. If you want a more general guide to setting up Windows Phone for previous iPhone users and what apps should be installed, read Scott Hanselman’s post. Remember to disable iMessage if you are moving from an iPhone. 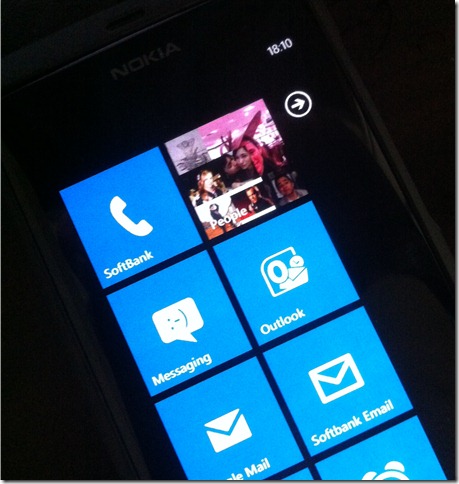 About the Nokia Network Setup application

DO NOT use the Nokia Network Setup application as it will not make your phone work with Softbank in any way. It tries to set up WAP-era metered dialup connection which Windows Phone 7 does not support any more. If this ever worked, it would cause massive phone bills and general misery. Steer clear.

What does and doesn’t work

The Softbank iPhone unlimited data plan works with other phones if you put the “secret” access point details in. The access point name is “smile.world”, username is “dna1trop” – you will need to Google for the password. Insert this access point information under Settings > Mobile Network > Edit APN and you will have data working, including HDSPA which will show up with an “H” icon in the status bar. 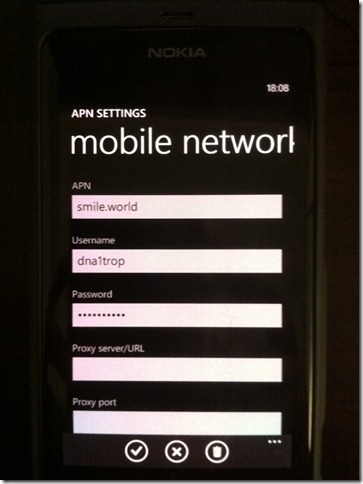 Messaging – dealing with the lack of MMS

MMS is supported by Softbank, but only on phone models they sell. Windows Phone 7 has MMS support but because the User Agent is unrecognized by Softbank, they block it at their MMS proxy server. Android users can easily change their MMS User Agent to match a phone that Softbank sell, but the Lumia 800 cannot do this as there is no Interop “root” access available yet. Nokia almost allowed the setting of MMS User Agent in the built-in Diagnostics application but for some unfathomable reason locked the “MMSPage.xaml” screen out – .NET Reflector even shows the registry key that the application would have edited:

Hopefully Nokia releases an updated version of the Diagnostics application where we can set the MMS UserAgent or an Interop unlock for the Lumia 800 is found.

Last year Japan’s networks turned on SMS, meaning you can send text messages between carriers just like the rest of the world. Messages are free between users on your network but about 3 yen to other networks. Japanese text is supported and Windows Phone will even show some basic emoticons out of the box. When somebody sends you an MMS to your phone number or keitai email address, you get an SMS reading “Get media content now”. You’ll be able to see who sent the message but won’t be able to read the contents or directly reply. With Windows Live and Facebook chat built into the phone, this is only a slight annoyance – it is in your best interests to wean your contacts off your Softbank-locked @softbank.ne.jp keitai mail address anyway as this will make it painless to change provider in the future once Japan’s carrier market has loosened up a bit. 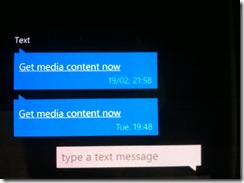 You can still use the @i.softbank.jp email address that you got with your iPhone as it is a standard IMAP account. Just add it as an extra email in Windows Phone and it will auto-detect the settings. You can email other keitai email users as it counts as a “keitai” email address so will not be immediately blocked by spam filters. When somebody sends an email to this address, you get a “flash” SMS. This system was used on the iPhone before it got MMS support.